9 Technology Mega Trends That Will Change The World In 2018

Some tech trends fizzle out and die a quiet death, while others are so significant that they transform our world and how we live in it. Here are the top nine tech mega-trends that I believe will define 2018 and beyond.

Trend 1: The increasing datafication of our lives

From chatting to friends in a messaging app or buying a coffee, to tapping in and out with an Oyster card or streaming music, today almost everything we do leaves a trail of data breadcrumbs. And this increasing datafication of our world has led to an unprecedented explosion in data.

Just in the average minute, Facebook receives 900,000 logins, more than 450,000 Tweets are posted, and 156 million emails and 15 million texts are sent.With numbers like that, it’s no wonder we’re essentially doubling the amount of data created in the world roughly every two years.

Trend 2: The Internet of Things (IoT) and how everyday devices are becoming more ‘smart’

The IoT – which encompasses smart, connected products like smart phones and smart watches –is a major contributing factor in this exponential increase in data. That’s because all these smart devices are constantly gathering data, connecting to other devices and sharing that data – all without human intervention (your Fitbit synching data to your phone, for instance).

Pretty much anything can be made smart these days. Our cars are becoming increasingly connected; by 2020, a quarter of a billion carswill be hooked up to the Internet. For our homes, there are obvious smart products like TVs,and less obvious ones, like yoga mats that trackyour Downward Dog. And, of course, many of us have voice-enabled personal assistants like Alexa – another example of an IoT device.

That’s already a lot of devices, but the IoT is just getting started. IHS has predicted there’ll be 75 billion connected devices by 2020.

None of this incredible growth in data, nor the billions of IoT devices available,would be possible without the enormous leaps in computing power that we’ve made. Between 1975 and 2015, computing power doubled at a rate of every two years, before slowing to the current rate of approximately every two and a half years.

Computers are now able to learn in much the same way as we humans do, and this leap in AI capabilities has been made possible by the massive increases in data and computing power. It’s the incredible explosion in data that has allowed AI to advance so quickly over the last couple of years; the more data an AI system has, the quicker it can learn and the more accurate it becomes.

Trend 5: The unstoppable freight train that is automation

The more intelligent machines become, the more they can do for us. That means even more processes, decisions, functions and systems can be automated and carried out by algorithms or robots.

Eventually, a wide range of industries and jobs will be impacted by automation. However, for now, the first wave of jobs that machines are taking can be categorized using the four Ds: dull, dirty, dangerous and dear. This means humans will no longer be needed to do the jobs that machines can do faster, safer, cheaper and more accurately.

Beyond the four Ds, machines, robots and algorithms will replace – oraugment – many human jobs, including professional jobs in fields like law or accounting. From truck drivers to bricklayers to doctors, the list of jobs that are likely to be affected by automation is surprising. One estimate reckons that 47 percent of US jobs are at risk of automation.

Trend 6: 3D printing opens up amazing opportunities for manufacturers (and others)

Related to increasing automation, the invention of 3D printing is disrupting manufacturing, and other industries, in many positive ways. In traditional (subtractive) manufacturing, objects are cut or hollowed out of material, such as metal, using something like a cutting tool. But in 3D printing (also known as additive manufacturing), the object is created by laying down, or adding, layers of material. The materials used in 3D printing can be pretty much anything: plastic, metal, concrete, liquid, powder, even chocolate or human tissue!

With 3D printing, far more complex shapes can be created than in traditional manufacturing – and using less material, too. It also allows for much greater customization of products, without worrying about economies of scale. 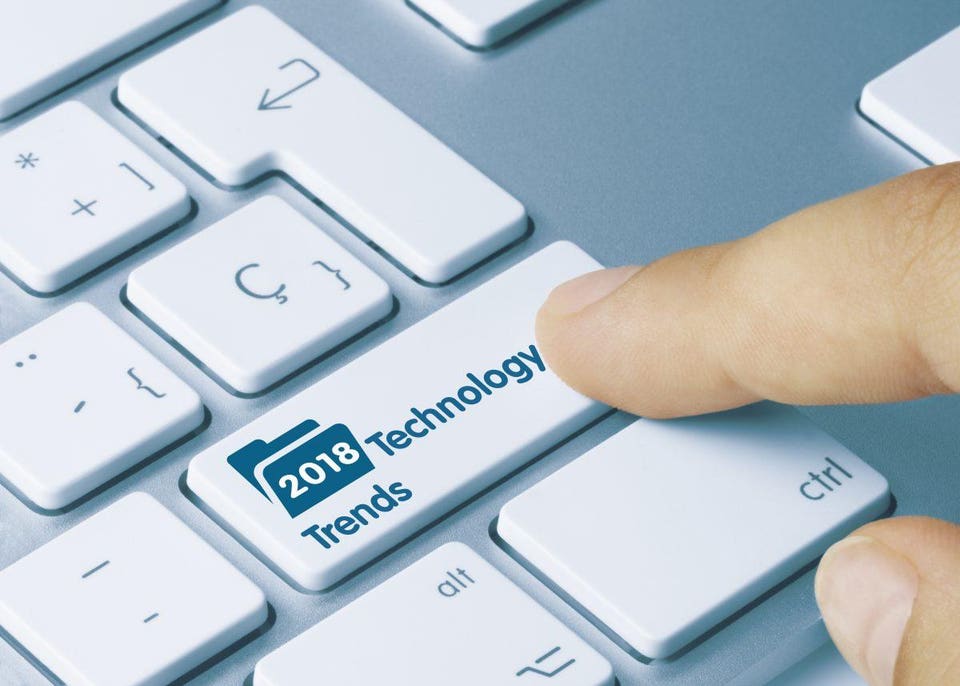 The way we interact with technology has changed dramatically in recent years – and is still changing. Thanks to smart phones and tablets, we can carry out a whole range of tasks on the move simply by touching a screen. Mobile web usage has increased to the point where, in 2016, it overtook web usage through traditional computers. Google has also confirmed that searches on mobile devices now outstrip desktop searches.

We’re also talking to our devices, using voice searches via Siri and the like. Estimates suggest that, by 2020, 50 percent of all searches will be voice searches, and around 30 percent will involve no screen whatsoever. As a result, all kinds of businesses are gradually integrating their products with the likes of Siri, Alexa and Google Assistant. For example, Alexa is being integrated into BMWs from 2018.

Virtual reality and augmented reality represent the next huge leap in interface innovation, transforming how businesses interact with customers.

Trend 8: Blockchains: An invention that could change our world

Blockchain technology is a very practical solution to the problem of storing, authenticating and protecting data. Think of a blockchain as a decentralized, extremely secure database. Or, to get slightly more technical, it’s a distributed, peer-to-peer ledger of records. While nothing is ever totally ‘hack-proof’, blockchain represents a huge leap forward compared to our current data security technology as, unlike a centralized database, there’s no one single point of failure.

The records in a blockchain are called ‘blocks’ and every block is connected to the previous block (hence, ‘block’ and ‘chain’). The whole chain is self-managed, which means there’s no one person or organization in charge of the entire chain. If that sounds familiar, it might be because the virtual currency Bitcoin functions on blockchain technology.

Financial services, insurance and healthcare are just some of the sectors where blockchains are likely to be heavily adopted. In fact, 90 percent of major European and North American banks are exploring blockchain solutions.

Trend 9: Platforms are the way forward for businesses

A platform is essentially a network (digital or physical) that creates value for participants by facilitating connections and exchanges between people for services, products or information. The platform is rarely the actual service provider; instead, it acts as a facilitator for the crowd, making interactions possible, easy, and safe for participants.

Platforms have given rise to businesses like Airbnb, Uber and Amazon, and are also the foundation of what Facebook and Twitter do. However, platforms offer growth opportunities across all kinds of businesses, industries and sectors – not just tech companies. Even long-running businesses with more traditional business models, like Ford, are beginning to develop platform strategies.

Related to the article at K18: KAZAKHSTAN GROWTH FORUM